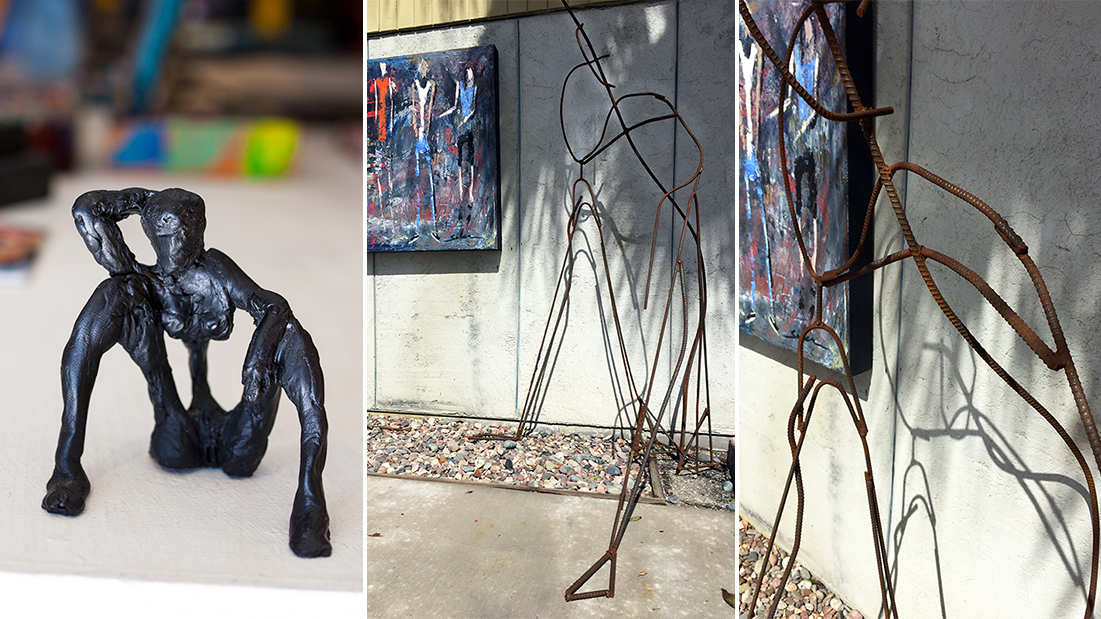 I found this two-part epoxy concoction you can find almost anywhere, and on a whim, wanted to make Renee a funky little sculpture. Funky is a cool word substitute for ugly. We like ugly, I mean funky sculptures. There is a challenge with being an artist that if a piece fights you, it will be your favorite and will have a much longer shelf life. Pretty typically lasts ten minutes – but not ugly, that lasts forever, haha! One of Picasso’s most famous paintings was touted as the ugliest thing ever created. Art critics called it “an insult to humanity”. Today, it (Les Demoiselles d’Avignon) is his most famous painting, and is one of the most purchased posters through all of the museums in the world. So, ugly/funky for an artist is the challenge we all face. Finding beauty in imperfection is the treasure.

Ugly/funky for an artist is the challenge we all face. Finding beauty in imperfection is the treasure.

I tested the grounds and gave it to her as a gift. She says she loves it and puts it next to her computer where she works 48 hours every day. You never know as an artist if the gift you make is going to be received with wonderfully open arms and then later stashed in the garage as soon as you’re out of sight.

My art teacher Dr. David King, he loves being known as Dr. King, use to say to us in art class that there is a bit of a curse in being a creative person. If you work with your hands and create something for someone as a gift, beware because most people will think “how cheap, you couldn’t just take a little time to go to the Apple store and get me an iPad?” People want a gift that comes with a receipt not something you dreamed up and worked on for hours and hours with your hands and is a one-of-a-kind item. People want what everyone else has, you selfish artist! OK, you get what I mean; I just want her to be honest with me about the gifts I make for her. If she thinks it totally sucks I want her to tell me it sucks.

Well, a year later, it was still sitting by her computer and every time I grabbed it to move here or there for whatever reason the alarm would go off. Be careful, don’t drop it, watch where you’re putting it, don’t touch it, I’ll move it, she would say. After the other larger sculptures in front of the gallery found homes, I started brainstorming about what should I create next to take their place. Renee requested that I make a huge version of this funky little figure sculpture. Really, I say thinking this is just one of those passing ideas thrown out just to be a part of the process. No, she really meant it and though I wanted to make a life size funky rhino, she hooked me on the idea of making the thinker big, it’s called the thinker.

So we ran about buying rebar and wire and more gas for my welder and sparks started flying and it’s now a work in progress. I’ve had a few commissions between then and now; that’s always a good reason to slow down progress. Almost done with the armature, I just have to reinforce a few spots because I have learned that kids just love to climb on shit. You know what I mean, I’m not calling my work shit I just never forgot what it’s like to be a kid. So, whenever I build a sculpture I have to remind myself to build it knowing some kid is going to try and climb it. And if that kid is five years old or sixty, I have to make it strong enough to withstand that happening over and over until it finds a home. Then the new owners can tell them, no climbing on the sculpture! Damn it!